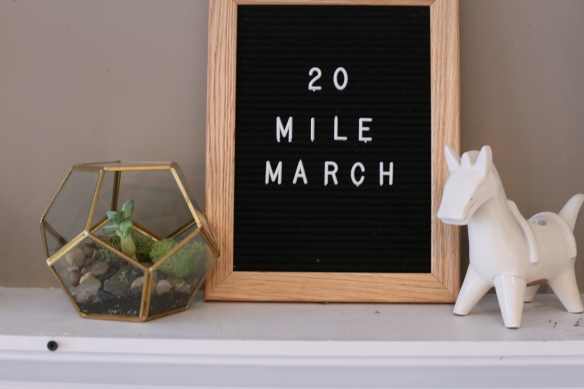 Have you heard of this concept before? The concept of the 20 Mile March? My husband was the first to tell me about it. Sometime last year, I believe. The basic idea is that if you were to travel to a destination, going around 20 miles per day no matter what, you would arrive there much sooner, and in better shape, than you would if you were to travel really hard on the good days and then not so much on the bad days. Does that make sense? There are plenty of examples out there. It’s based on the first groups of people to travel to the South Pole, back in 1911. Team 1 traveled 15-20 miles per day, every day. They didn’t overextend themselves on the good days, and they didn’t hold themselves back on the bad ones. Team 2, however, traveled as much and as far as they could on the good days, and then didn’t travel as hard (or even at all) on the bad ones. Team 1 arrived at the South Pole weeks before team 2. They were able to travel on the bad days, in worse conditions, because they hadn’t exerted all of their energy on the good days. So then, this concept is now used in every day life and situations.

Admittedly, it is in my nature (down to my core) to act like Team 2. When I feel good, I want to keep going and going and going and going (much like the Energizer Bunny). In fact, when Blake was telling me the story of the 20 Mile March, I was certain that team 2 was going to make it to the South Pole first. Really. I was shocked when he told me otherwise. Like, for a minute there, I didn’t actually want to believe him. That being said, I have tried to put into practice this whole “20 Mile March” thing. I wanted to put it to the test. And can I tell you a secret? It. Works. At least so far it has.

I had this idea last year that I wanted to get my whole house really nice and clean and organized. A place for everything. I tried. I really did. And I even made some progress. But once I start a task, I want to finish it. Even if that task takes me 4 hours straight-which is not ideal when you have 3 screaming kids who really need their mommy. A person tends to get burnt out pretty quickly doing it that way.

So this year, I had the same goal. I really wanted to make my house nice, and clean, and fresh, and organized. But this time, I was going to try it a different way. I was going to 20 Mile March it. And, you probably wouldn’t even believe it if I told you: It’s only January 11, and I have already made more progress in this year than I did in the whole entire year last year. For. Real. I’m not lying, I’m not making it up, and I’m not kidding you. This whole 20 Mile March thing is the real deal. I wish I would have known about it in my childhood. And when I first got married. And when I first became a parent…

So how do I go about my 20 Mile March? I’m so happy you asked! I do 2 rooms every weekday, one upstairs, and one downstairs, and I work one section at a time. I do the upstairs task right after I lay our youngest down for her nap, and then I find time to do the downstairs task when all the girls are awake and playing-I don’t do it at night (that’s my resting time). The night before, I choose what tasks I will complete for the next day. And I keep it simple and easy. For example, I started in the kitchen and our master bathroom. To begin, I went through the drawers on my side of the sink in the bathroom. Done. Then, I went through our cup cabinet in the kitchen. Done. And that was it. No more, no less.And even when I REALLY REALLY don’t feel like doing it, I simply tell myself, “20 mile march. Just 20 mile march. You can do this.” For the times I want to keep going, I tell myself, “That is tomorrow’s task. You will have time for it then. Go enjoy your girls.” Let me be clear: the whole family is way happier this way.

The other part that helps me push through and keep to it: I give myself a small reward for each room I finish. Now, when I say reward, I don’t mean that I go and buy myself a Venti latte from Starbucks (although that is tempting). My reward is something that would either help to organize that specific room, or simply something that will make that room look nicer. I just finished the master bath last week, and as my reward, I painted our awfully ugly honey colored cabinets a really nice, shiny dark blue, and bought some bronze handles for Blake to put on them. I’ll post some before and after pics of them once the handles are on. Today, I just finished the kitchen. And while it might seem weird, my reward is going to be contact paper for the very tippy tops of our cabinets. Just trust me on this, it’s definitely an appropriate reward.

My other project today was in our master bedroom. I decluttered the shelf next to my side of the bed. Here’s the before. 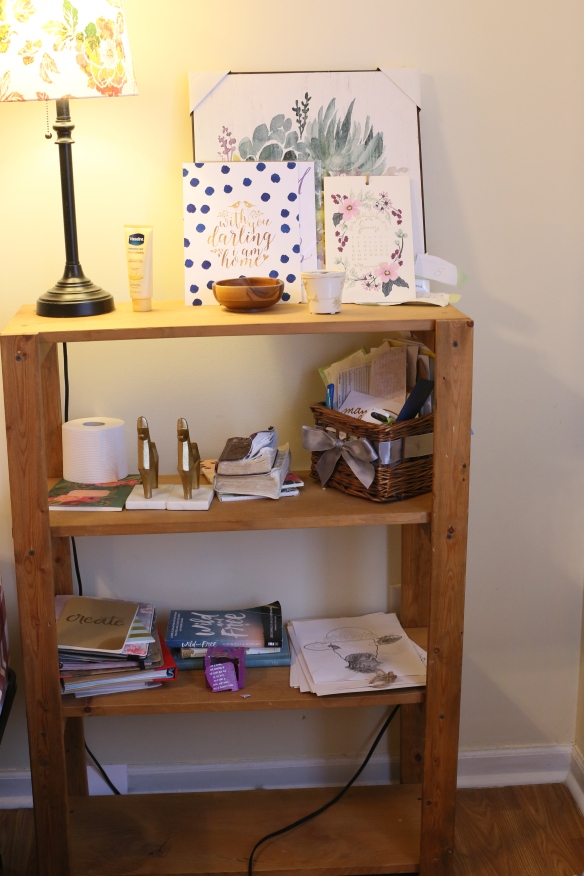 And here’s the after.

It’s not a hugely significant difference, but enough that I feel really good when I look at it.

I know I have a whole huge house with lots of tiny crevices and corners to clean and organize, and that can be entirely overwhelming and defeating. Sometimes that thought alone makes me want to quit. However, I will press on. 20 Mile March. Just enough every day to make it to my goal. And let me tell you, I cannot wait!

This week’s Fantastic Find Friday feature is my Beco Baby Carrier. Guys. For real. I love this thing. I truly don’t know what I would do without it. As a busy mom of 3 four and under, this thing is like a lifeline. I’ve accidentally left it at home before when I’ve gone out to the store. And it was kinda the worst. Because we opted to get a convertible carseat right away for little baby Eleanor, we don’t have an infant carseat. And while she is on her way to sitting up on her own well, she still hasn’t mastered the task. So that means, if I forget my carrier, I’m stuck carrying her and trying to manage the other two, while trying to push my cart with one hand and simutaneaously put the items into my cart. It does not make for a happy shopping trip. For anybody. It’s not just the store though, I use this baby everywhere! The zoo, the park, hiking, at the apple orchard, the farmer’s market. Sometimes I even put it on in the house when I’m really needing to get stuff done and Eleanor is just not having it. What’s nice is that Eleanor really likes it too. She’s a snuggler, so being snuggled up so tight to mommy almost always puts her in a good mood.

While I know there are some other really great carriers out there, I chose this one because

a: my friend who has about a million carriers said that this was her personal favorite

b: all the different ways you can wear it

c: this thing is so easy to use and i can do it all by myself-I don’t need a second hand there to help me out with it.

Seriously, especially if you have more than one kid, I would definitely recommend this carrier. I actually told one of my sisters the other day that they couldn’t have a baby unless they got this carrier. I personally have the GEMINI. You can snag one here. There are so many different cute styles, you’re going to have a difficult time deciding. It’s for sure an investment that you won’t regret making. I promise, you’re gonna love it! 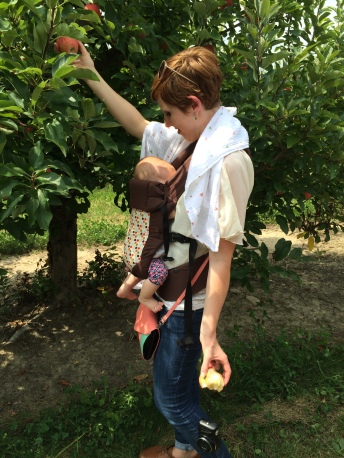