I know I’ve been off my game this year. It’s ok. I’m letting it slide. I want to let you all in on a little secret. I don’t have it all together. I know it can seem that way so many times. We see each other once a week or so, or only through social media, and everything seems perfectly in place. I’m not saying my life always looks like that (in fact, I feel like it seldom does), but that’s often (almost always) how I view other people. It’s this lie that the enemy likes to whisper in our ears, “everybody has it together except for you….you are not enough…you’ll never own up, so just. stop. trying.” It’s super embarrassing to post this for all the world to see, but I had a little meltdown Sunday night. We had a fun, busy weekend, and we came home to a disastrous house. After we got the girls in bed, Blake went down to the basement to finish up some work that he had and I spent the next hour or so cleaning our pit of a house. The whole time I kept asking myself, “How on earth did it get this way?…I try so hard all day long, and this is still what I end up with?…Why can all the other moms out there get this, but I just can’t?…I will never be enough. I can’t do it. This is too hard.” And on and on and on. I cried myself to sleep that night. That almost never happens.

I tell you this, not because I want your sympathy or your pity. I tell you this because I know every other woman out there has felt this way at some point or another. It seems as though we are always in some sort of unspoken competition with each other. I see it in my daughters already and I try to fight those kinds of thoughts out of their sweet little heads. The enemy we face is real, he starts to prey on us while we are young, and he never stops.

Truth be told, I have a lot of good reasons for not being on top of things. We’re homeschooling, which is awesome, but we’re only in 1st grade and I’m still trying to figure it out. I’m 30 weeks pregnant. The aches and pains and limitations are real. And with our history, I’m taking every precaution possible. I refuse to push myself too hard this time. Blake just started his own company a few moths ago with 3 other partners. Everything is new, and exciting, and hard. He works 50-80 hour weeks every. single. week. It’s just a season, it won’t always be like this. But it is the season we are in now. And it’s hard. Raegan had her tonsils out a couple of weeks before Thanksgiving. And while she was recovering, she came down with this awful virus that made her recovery 10x worse-and longer-and harder. We had sick kids for basically a whole month. Life. Just. Happens. Things fall through the cracks. Sometimes we can’t keep up. And that’s ok. But it is oh so hard to remember that in the moment.

I was “off” for a couple of days after that. I just felt so defeated. Then Eleanor fell off of our rocking ottoman just before bedtime on Tuesday and I rushed her to the ER so she could get stitches. The waiting room was jam packed and we were there until just after 1am. She got 3 stitches in her tiny little eyebrow that night. When I got home, the other 2 kids had woken up and didn’t go back to sleep until 4am. It was the second night in a row they had done that. Needless to say, this week has been more than exhausting. Then on Thursday morning, Blake paid for me to go get a (very much needed) prenatal massage. We went out to eat that night for my Mother-in-law’s birthday. It was so nice. Just what I needed to turn my week around. I’ve been ok since then. I still have to fight to press down those lies that I get fed all day long. But it’s a battle that I feel like I’m winning right now. The counters in my kitchen aren’t clear from the clutter that’s on them. Our laundry room needs picked up. Our floors could be mopped (even though I’ve done that just about every day this week). But our room is clean, the girls picked up their room, I’ve kept the playroom clean for 10 whole weeks now, and our dishes are washed. I’m counting my wins. Trying to focus on what I’ve accomplished instead of what I’ve not. And tonight, I am going to post what we’ve done for the past few days-it may be late, but I’m doing it, and that’s a win.

SO, all that to say, on Tuesday, we made a gingerbread house. I learned something that day: gingerbread house making is not my strong suit. Next year, I’ll probably buy an already constructed one for us to simply decorate. 😅 You guys, the struggle was real. My mom was actually able to come over for a bit to help us out with the project-so that was really fun! 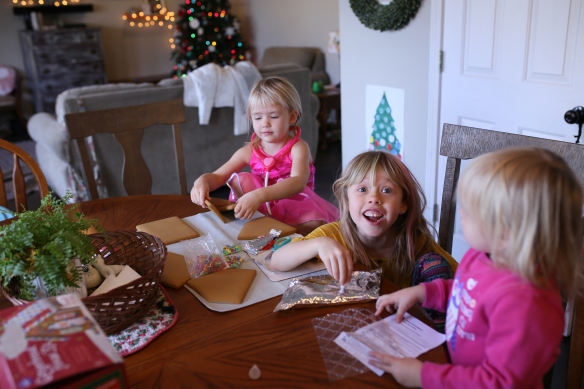 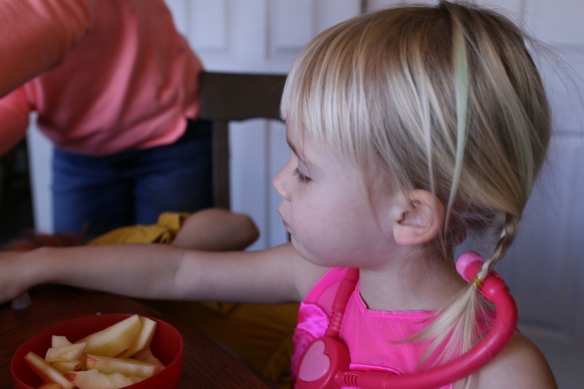 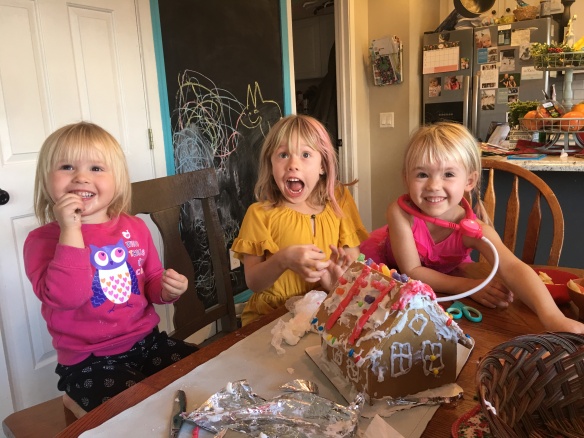 And 30 minutes later, this is how it ended up: 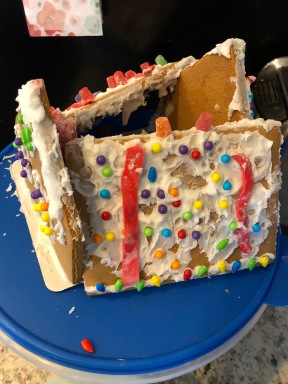 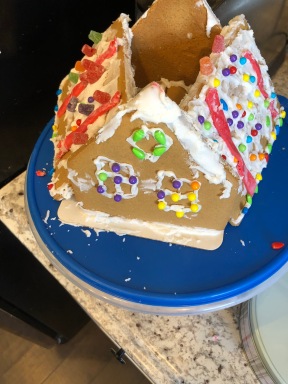 Wednesday, we went through the drive-thru at Starbucks so momma could get a Chestnut Praline Latte (my absolute fave), and so the girls could each get on of those snowmen cookies they are always begging me to get for them. We had some errands to run, so this was the only picture I got.

Thursday, I gave the girls some really fun, incredible Christmas activity books from Usborne. Those books kept them occupied for the longest time. 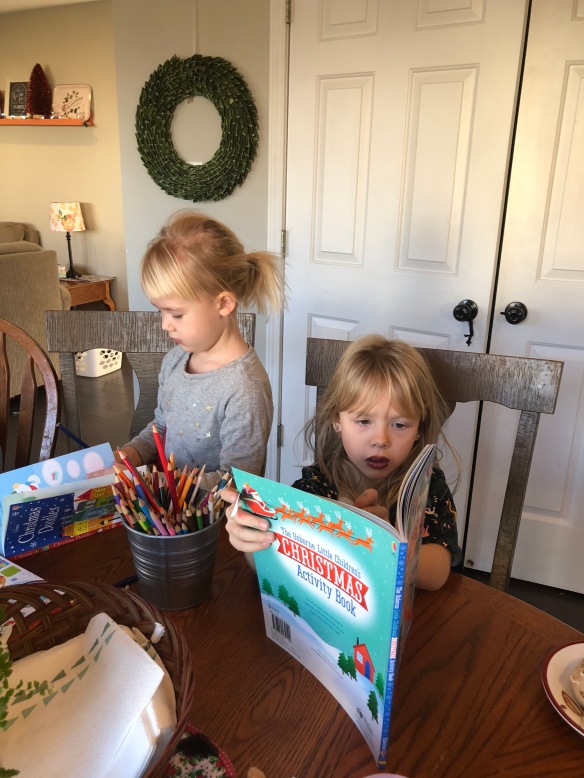 Friday, we decorated those plastic ball ornaments with the girls. We pulled the glitter out again. It was a HUGE hit. I should have taken some “after” photos, but Blake and I had to rush out before they were done for a Christmas party. My parents helped them finish up, but I never snapped any more photos. 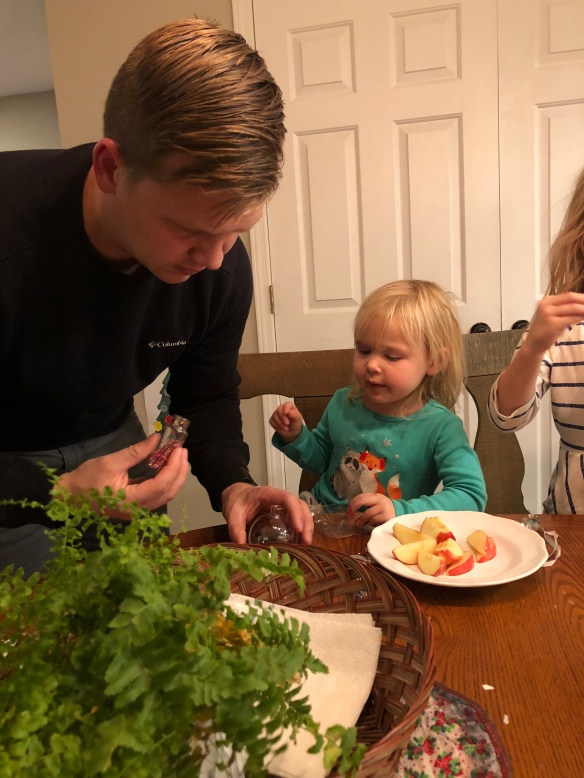 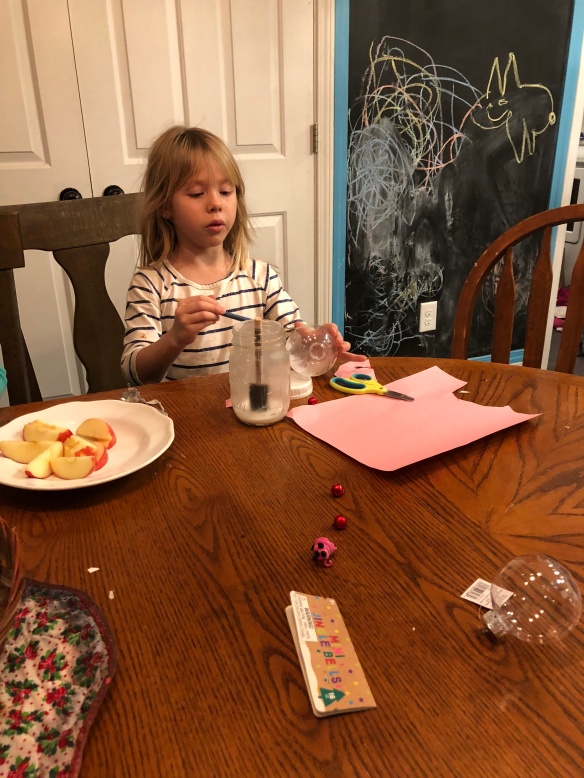 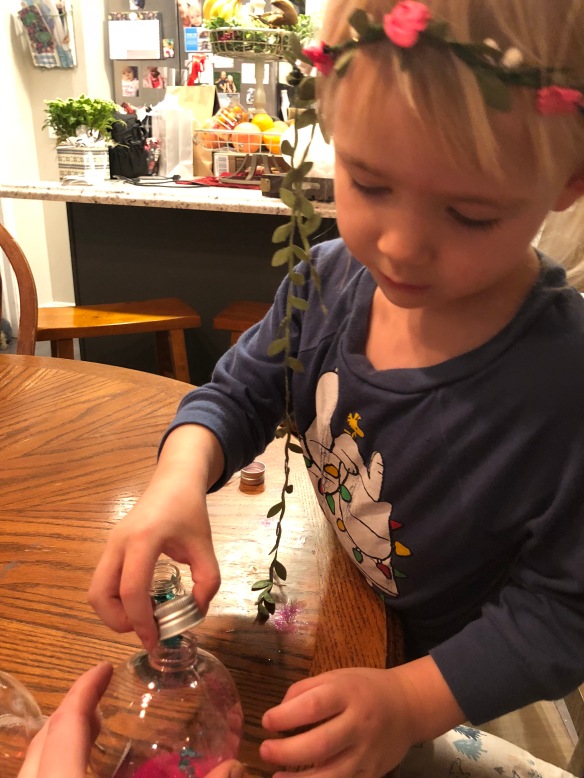 And this morning, Saturday, we had our second annual Ron Swanson themed Christmas party with another family. We were having so much fun, I forgot to take pictures. But we had bacon, and eggs, and ham, and we exchanged gifts. The kids played and we parents got to talk. It was such a good, refreshing morning.

Well that’s it! Thanks for sticking with me! Even though it’s been crazy, I am truly enjoying this holiday season, and I hope you are too.

Heeeeeeeeyyyyy friends! I have had activities/events back to back all Friday until today. I’m not complaining, it’s been mostly really fun stuff-just crazy busy. For our advent on Friday, we went through the Chick-Fil-A drive-thru for lunch. It was sooooo good. But, I forgot to take any pictures, so you’ll just have to take my word for it.

Saturday morning, Blake helped a friend move, so the girls and I stayed in and had a hot chocolate date (did I mention that it was snowing?! #perfect). I found some really cute tiny mugs at Target for the girls and I hid them behind the tree for them to find. While I washed the mugs and heated up the water, Lane cleared out the family room, and laid out our Gathre mat. She also grabbed all the chocolate we had in the fridge so we could have some of that. They must have really enjoyed last year’s hot chocolate party, because they definitely wanted to recreate it this year. 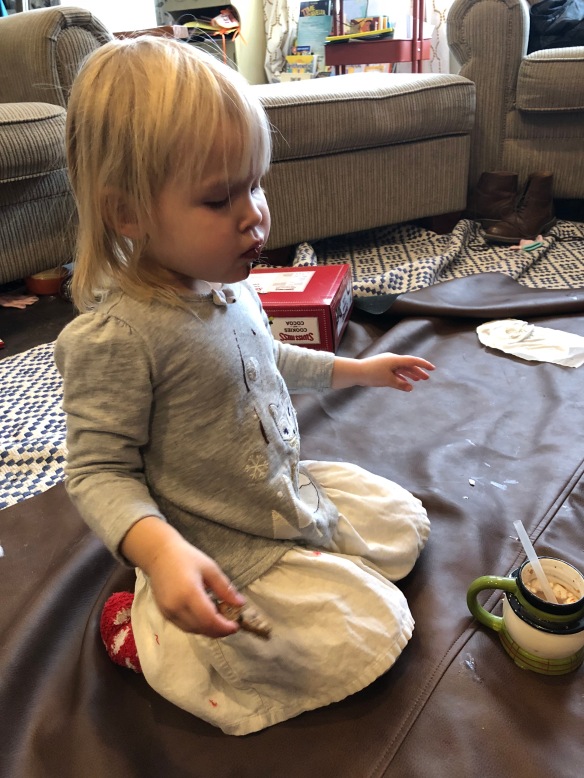 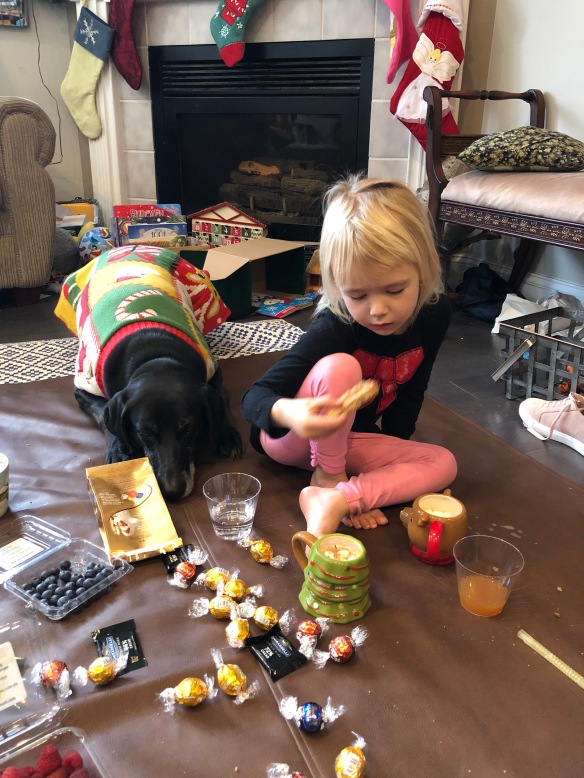 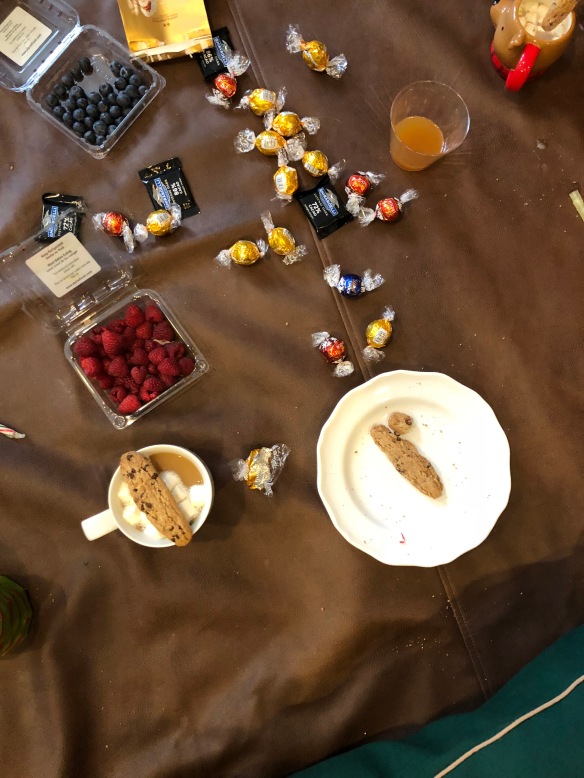 Sunday night, we drove through our favorite neighborhood this time of year to look at Christmas lights. The girls were super tired (Rae fell asleep long before we even got there), so we didn’t spend much time doing it, but it was lots of fun anyway. Once again, I forgot the pictures, so you’ll have to take my word for it. 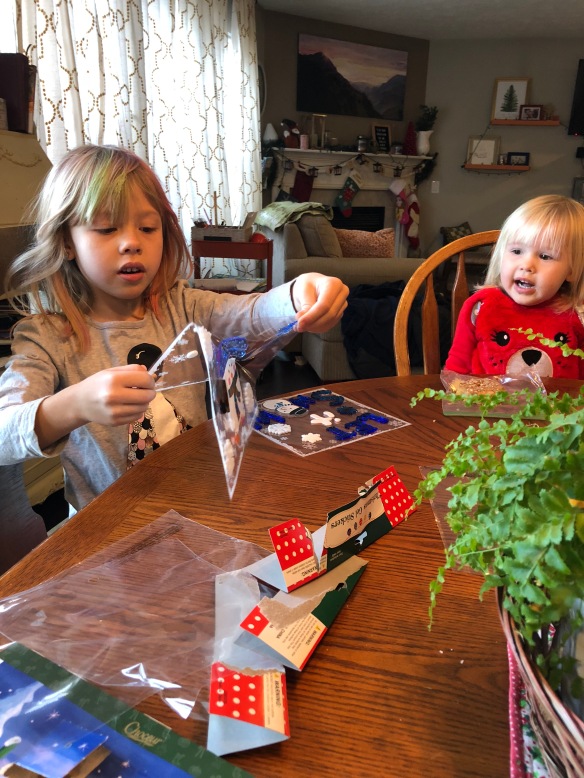